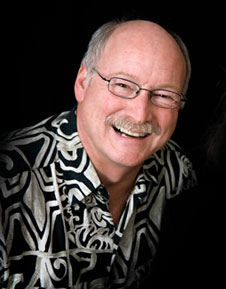 Dr. Jim Szana (pronounced “ZAH na”) or simply known as Jim is a retired dentist of 50 years. He worked in Pierre and Murdo, South Dakota for 45 years, and 5 years in the United States Air Force.

Jim says, “The bossa nova sound of Jobim has always fascinated me.  I like the happy samba sound and the unusual chord structure that is Jobim.  In my late teens and early twenties Ramsey Lewis made a real impression on me.  I liked the way he played Beatles and other popular groups in his own style.  Recently, I have come to appreciate Dave Brubeck who is clearly in a league of his own, his chromatic patterns can be very complex.  Because I never played in any band until 1998, I already had my “style” and that leaks out in virtually every song I play.”

Jim is also a Viet Nam veteran and that experience has colored his world.  The idea Good Evening Viet Nam did not just occur to him, rather it consumed and over took him.

Why does Jim play jazz?  “Jazz is improvisation.  I make a lot of mistakes and when you try and correct your mistakes on the fly you can come up with some interesting scenarios.  Some of my best riffs have occurred under the duress of being totally lost.  Besides, who wants to play anything the same way every time?”

“Music helps not the toothache.”

“A legend is an old man with a cane known for what he used to do.”

“The basic difference between classical music and jazz is that in the form the music is always graver than its performance—whereas the way jazz is performed is always more important than what is being played.”

“The notes I handle no better than many pianists. But the pauses between the notes—ah, that is where the art resides!”

“A musician may suddenly reach a point at which pleasure in the technique of the art entirely falls away, and in some moment of inspiration, he becomes the instrument through which music is played.”

“Music is too idealistic a thing to permit itself to be bound to concrete references. You cannot have a white horse in music.”

“There’s only one way to sum up music: either it’s good or it’s bad. If it’s good you don’t mess about with it; you just enjoy it.”

“Forget the notes so that you can play them.”

“Disharmony is simply a harmony to which many are unaccustomed.”

“Discord occasions a momentary distress to the ear, which remains unsatisfied, and even uneasy, until it hears something better.”

“Let us not forget that the greatest composers were also the greatest thieves. They stole from everyone and everywhere.”

“Jazz is about the only form of art existing today in which there is freedom of the individual without the loss of group contact.”

“Music is your own experience, your thought, your wisdom. If you don’t live it, it won’t come out of your horn.”

“Too many pieces of music finish too long after the end.”

“Jazz is about the only form of MUSIC in which the same note can be played night after night but differently each time.”